Carter Parker’s 1941 Tennessee license plates have been in the devoted care of his younger brother, Dudley Parker, all these years. Carter died November 12, 1944, during World War II, in the long and bloody infantry battle of Hürtgen Forest in Germany. His grieving parents, Mr. Crockett and “Miss Ethel” Parker had been sheltering his 1933 Chevrolet four-door sedan, expecting that Carter would return home from war and drive it again. But that was not to be.

Not wanting to sell Carter’s beloved possession after his death, they continued to protect his car until it rusted out and became unusable. After Mr. Crockett and Miss Ethel died, Dudley tore down the old garage and salvaged the car’s two license plates. Identical plates were on the front and back of the vehicle, so there are two Carter license tags which read 79 – 87, 1941 TENN.

Carter, at age 22, had bought the car from Hatcher’s used car lot in Murray, KY in 1940. Dudley says the used Chevy was probably bought for something less than a hundred dollars. Carter paid for the seven year old ‘33 Chevy with money he earned while working on his Uncle Jack Parker’s and Uncle Horace (Hoss) Parker’s farm by the Tennessee River at the mouth of Standing Rock Creek. “Uncle Hoss” in particular had bonded with Carter.

Carter’s license plate number was 79 – 87. The first number on a Tennessee tag represented the county. In this case, 79 represented Stewart County where we lived. The second number represented the order in which tags were sold, indicating Carter’s tags were the 87th ones sold in Stewart County that year. There was not much traffic in those days, so a lot of attention was paid to what county a car was from. 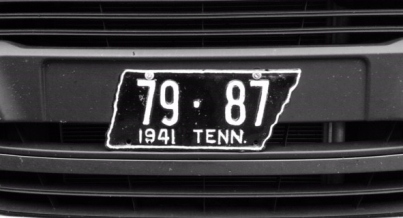 The license plates were made by inmates in the Tennessee State Prison in Nashville. The prison was an immense medieval looking structure, complete with turrets, and built of gray Indiana limestone. It was affectionately known as “The Castle on the Cumberland”. Many decades after Carter bought his ’41 license tags (75 years to be exact) in March, 2016, Dudley and his daughter, Dotty, traveled in Dudley’s car, from Nashville to visit me in Florida. As Dudley’s 2015 Ford Transit sat in my driveway, I became intrigued by the 1941 Tennessee license tag on his front bumper. At my urging, Dudley told me the story of displaying Carter’s tags on whatever two vehicles he and his wife, Dot Martin (my sister) had owned through the years.

Dudley remembers first attaching one of Carter’s license plates to the front of his 1971 Ford truck. Since that year, every vehicle mentioned here has displayed one of Carter’s license plates on the front. Each time, before a Carter’s tag was attached to a new car, it was sandblasted down to bare metal, given three coats of glossy black paint with each coat allowed three days to dry. Dudley would then spray white paint into a cut-off beer can, and with a small artist’s brush, painstakingly paint the raised numbers and letters white and then add white to the raised outline around the outer edge of the tag.

Tennessee tags were in the shape of the state of Tennessee, which means the ends were squiggly and quite challenging to paint. On the right side the curves are suggestive of the winding Blue Ridge Parkway. On the left side, the curves represent the path of the Mississippi River, which formed the western state line. Painting those numbers and squiggles could only have been a labor of love!

Throughout the years, complete strangers have noticed and some have challenged the authenticity of the 1941 Tennessee license plate. Dudley gladly answers their questions, explains the history, and proudly tells of his brother’s sacrifice.

I grew up knowing Carter. I was fifteen when the shocking news came that he’d been killed in action. The war took him and my brother, Dale, within six weeks of each other. His mother, “Miss Ethel” and my mother “Miss Hattie” were best friends. Carter’s parents, Crockett and Ethel Parker, and my parents, Stanley and Hattie Martin, were close neighbors. Their small farms were separated by a beautiful, tree-lined, clear, winding, and rocky creek called Ribbon Branch. Miss Ethel gave me my first bath on the day I was born in our old two-story farm house which stood between Standing Rock Creek and its small tributary, Ribbon Branch.

We Martin children, Dot, Imogene, Leita, Dale, and I (Pattie Mae) grew up alongside the Parker children, Carter, Evelyn, Margaret, Dudley, and “Little Horace” who died of meningitis at pre-school age. On weekdays we attended the one-room Mulberry Hill Elementary School together. On Sundays, we attended the one-room Standing Rock Methodist Church together. As teenagers we rode school buses together to attend Dover High School which was a ten mile trip each way on unpaved roads.

Our families were very close, as were all the relatives and neighbors in our close-knit rural community. Carter’s and Dale’s deaths were a stunning loss for all of Standing Rock Creek and surrounding communities. As everyone said, two finer young men could not have been found.

After the war, both Carter’s and Dale’s remains were eventually brought home from Europe and were buried with full military honors in Ft. Donelson National Cemetery in Dover, TN.

As mentioned above, Dudley has honored Carter by displaying one of his 1941 Tennessee license plates on every vehicle he and Dot owned since 1971. Carter was fully deserving of such reverence and respect. He was a hard-working, happy-go-lucky farm boy who loved playing baseball. He answered FDR’s 1941 call to war, served valiantly, and died as a U. S. Army Staff Sergeant in one of the most hellish infantry battles in history. My brother Dale was killed the following month in the Battle of the Bulge which dominated the news more than the equally horrific Hürtgen Forest Battle in which Carter died.

Dudley lost his brother, Carter, and his best friend, my brother Dale, that terrible fall and winter of 1944. Seeing Carter’s license plates on Dudley’s cars helps us to never forget.

One thought on “CARTER’S 1941 LICENSE PLATES”